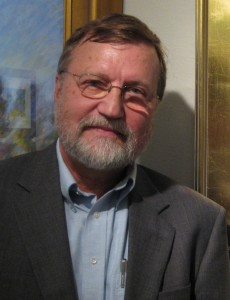 Wolfgang Ertl’s academic background is in the field of literature, but he has also had a lifelong interest in the history and theory of art. He started painting in his youth in Germany, always equally drawn to abstract compositions and representational landscapes.

A professor emeritus at the University of Iowa, he moved to New England in 2005 and now resides in Hampton, NH. He has participated in various juried exhibitions in Maine, New Hampshire, and Massachusetts. His paintings have also been exhibited in solo and small group shows in several galleries.

While he endeavors to capture the atmosphere, topography, light and colors of various locations in the United States, Canada, and Europe, he is less concerned with “realistic” representation of observed landscapes than with creative stylization and abstraction. His creative process often also results in imagined landscapes and non-representational abstracts. Pastel has been his favorite medium for many years, but he also enjoys working with oil and acrylics.